Here's my bike. I'll have to figure out how to upload the idle.
THIS is one growling beast of a hog.
So is the bike. :)
Posted by Camille Eide at 4:55 PM 6 comments: Links to this post 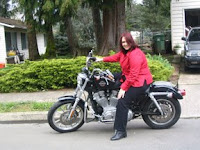 Imagine my surprise when my darling stud of husband of nearly 25 years pulled me out of my writing cave last Sunday in my writing attire including bare feet, and escorted me out the front door. With a silly big grin.


He wanted to show me somethin. But I heard that deep throated V-Twin cruiser rumble and felt the ground pulsate before I rounded the corner of the garage and saw it.


That's right. A Harley. My husband thought I'd dreamed and whined about wanting one long enough. That or he just really loves me and knows this chick gets WAY more excited about an idle you can hear for miles, shiny chrome and black leather than some stuffy old jewelry.


We'll be celebrating our 25th this summer. On the road. If I can figure out a way to get him a matching one. Maybe I'll sell the NOVEL I'm cramming to finish and I can buy him one too.


Thanks, honey. You ROCK!!
Posted by Camille Eide at 9:39 PM 7 comments: Links to this post

I shop for groceries weekly, have to, that’s how the buck rolls. And with a husband and 4 young adult children (16-22) in the house, I’d face mutiny if I didn’t provide a steady supply of food. Of course, the worst they (the big kids, that is) can do is go on strike, which would look pretty much the same as it does now, or abandon ship, which I think is actually the point.

Before becoming a serious writer, I used to grocery shop on Friday mornings, my day off from the day job. But as a writer trying to put out a decent word count, I discovered Fridays offer me a priceless sanctuary: 8 hours of empty house. You can’t buy that, not even with homemade cinnamon rolls. Which I should have known would backfire. duh.

So I’ve started shopping on Saturdays. What a culture shock! I’ve repented of taking my Friday co-shoppers for granted.

On Fridays, I used to pass other single, swift shoppers with carts they’ve also made sure roll straight BEFORE they loaded up, lists in hand, good walking shoes on their feet and a goal in their eyes. These people know what they want, how much they want to spend and how many other stops they can make before the ice cream melts. They bag their groceries quickly, pay and disappear.

Saturdays, when the determined Friday shoppers are doing something productive, I am in the store with co-dependent couples and entire families who obviously don’t drink coffee or anything else that might shake them violently from their stupor and who:

1) don’t realize that the rules of the road could be of benefit in a grocery aisle,

2) don’t seem to notice that there are people waiting on either side of their ‘what do we want for dinner, everyone?’ logjam in the center of an aisle,

move at any measurable speed,

4) just discovered there are choices of prices, sizes and brands and pull up a chair to ponder the differences,

5) move slower than a submission in a slush pile,

6) loudly discuss the drama in their lives for everyone else to hear,

7) bring tired, hungry, bored children to the store and ignore the amount of noise they make and where they crawl, stand, sit, play or poop,

8) wait until ALL their groceries have been rung up and paid for before they start bagging them,

9) stare at their cart full of bagged groceries and wonder how they’ll carry all this stuff on the bus home.

Haven’t these people heard of being proactive? Prepared?

I marvel at the couples who need to do their shopping together, as though they can’t make a decision, push a cart, or bag it up on their own. And who wait until Saturday, wasting an entire day doomp-de-doomping at a leisurely pace in a place where I want spend no more of my life than is critical to my survival.

Such a waste of time. Isn’t it? Or do some people actually enjoy being together no matter how much they block the aisles? Maybe they just know how to relax. Maybe they really LIKE spending an entire Saturday hanging out in a grocery store together. Maybe I should start bringing my husband and our gang with me to the store.

Maybe . . . then we could discuss our lives and our drama with each other instead of penciling it in on my list of things to do . . .
Posted by Camille Eide at 8:50 AM No comments: Links to this post