Bring Out The Blarney Stone, It's Election Year 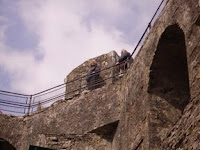 Shane, my missionary son, visited THE Blarney castle housing the famous Blarney stone. Shane writes:
It's Blarny Castle in County Cork, about a four hour drive away. It's on the west coast of Ireland. There's a stone at the top of the castle that, according to tradition, you're supposed to kiss. It'll give you 'the gift of gab.' Apparently, that's where you become a very tactful and witty speaker. Winston Churchill kissed it and look how he ended up. I didn't kiss it. I figured I didn't need the gift of gab. (~Shane Eide, Missionary & Novelist)
So I did a great deal of follow up research which took about 2.3 google seconds. The Wise and Almost All-Knowing Wikipedia offers this list of fascinating theories involving the stone:
* the Stone was the stone that Jacob used as a pillow, and was brought to Ireland by the prophet Jeremiah
* the Stone was the pillow used by St. Columba of Iona on his deathbed
* the Stone was the Stone of Ezel, which David hid behind on Jonathan's advice, while fleeing from King Saul, and may have been brought back to Ireland during the Crusades
* the Stone was the rock that Moses struck with his staff to produce water for the Israelites during their flight from Egypt
* in Ireland, the Stone was known as the Lia Fail or "Stone of Destiny", part of the king's throne, with mysterious powers
* the stone's powers were revealed to the McCarthys by a witch who had been saved from drowning
A couple more mildly interesting items to note:
1. According to common legend, the stone is believed to be half of the Stone of Scone which originally belonged to Scotland. Scottish Kings were crowned over the stone because it was believed to have special powers. One story says an old woman cast a spell on the stone to reward a king who saved her from drowning. Kissing the stone while under the spell gave the king the ability to talk sweetly. He was able to talk anyone into doing things. The stone was given to Cormac McCarthy by Robert the Bruce in 1314 in return for his support in a battle. Queen Elizabeth I wanted the Irish chiefs to agree to hold their own lands under title from her. Cormac Teige McCarthy, the Lord of Blarney, handled her every Royal wish with clever promises keeping loyalty to the Queen without "giving in." Elizabeth proclaimed that McCarthy was giving her "a lot of Blarney." This is how the story began that if you kiss the blarney stone you will also be able to make clever promises.
2. Apparently, the stone inspired this wee poem:
"There is a stone that whoever kisses,
Oh! he never misses to grow eloquent
'Tis he may clamber to a lady's chamber,
Or become a member of parliament."
~ Francis Sylvester Mahony, who may have actually kissed the stone before he penned this verse. 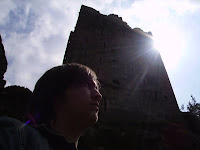 3. Rumor has it that locals are known to 'relieve' themselves on it. I'm glad to hear my son decided against puckering up to it. Smart lad.
So those who seek the gift of gab may ---with a little gymnastic effort ---kiss the stone.
Now here is where I'm confused. Some define the gift of gab as eloquence or skill at flattery. I always thought the "gift of gab" was the ability to talk much and say little. Maybe it's the same thing?
Posted by Camille Eide at 8:33 AM

I now know more than I ever wanted to know about the Blarney Stone. Smart lad indeed! And I thought "gift of gab" was an insult. Meaning, someone talks too much. But in Ireland it could mean something else.

What a fun post. Living vicariously through your son's adventures must make you feel you are part of the trip. Maybe just seeing the blarney stone will give him the words God has for him to share on this mission trip.