I have been eagerly waiting to get my hands on the second book in author W. Dale Cramer's latest series (The Daughters of Caleb Bender), The Captive Heart. It just arrived last week and I tore right into it. I was not disappointed! 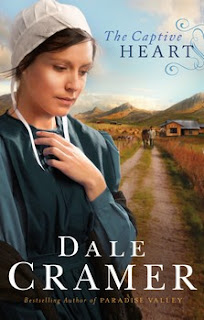 The Captive Heart continues the story begun in Paradise Valley (2011), in which Amishman Caleb Bender and his family move from Ohio to Mexico in the 1920s to avoid religious persecution. But the troubles they and other settlers face in the beautifully fertile yet rugged new land prove to be a far greater challenge. In the turbulent aftermath of the Mexican Revolution, the cultural climate is unstable. Increasing trouble with roaming bandits causes Caleb to doubt not only the success and happiness of his beloved family in this new land, but his wisdom in bringing them and other families here.
Fresh descriptions throughout paint a vibrant, beautiful setting against the rugged Mexican landscape. In each book, the girls’ unique stories are artfully woven together with the overarching story of Caleb Bender, the father whose desire to honor and trust “Gott” leads him on a journey that shakes his faith and tests his quiet, noble strength. A pacifist by faith, this father faces the unthinkable: threats against the lives of those he loves. How will he respond? How many must be harmed, even lost before it ends? Must he rethink what he has always believed about the value of a man’s life versus a man’s soul?
I loved meeting the characters in Paradise Valley and getting to know them better in this second of the three book series. Miriam takes the lead with her forbidden yet growing love for Domingo, the half-breed Mexican native who works for Caleb. A man of strength and wisdom, Domingo declares that the religion of the Amish “makes no sense,” and that there are many “fences” that forbid a relationship with Miriam, the one he calls “Cualnezqui” or Beautiful One.

Domingo is wonderful character whose honesty, strength and nobility I found intriguing. His desire to understand this Christian “religion” was borne of the troubling fact that it “makes no sense.” The simple truth of the gospel is displayed in the lives of many characters, not so much because of their unusual ways, but by the consistent grace and strength evident in their lives. The daughters each possess a unique, distinct voice, each one displaying their own strength of faith and quiet beauty. One daughter voices simply yet powerfully what it means to be a child of God. I appreciated her simple message that it is not about how we practice our faith or what disciplines it takes to conquer our sinful human nature, but that it is a matter of constant surrender to God.


Knowing Cramer has both a family history (see the award winning Levi's Will) and intimate ties to the Amish community makes the stories and characters that much more fascinating. The backdrop and setting for this series is based on actual events that occurred in his family in the 1920s, making this story especially intriguing. Cramer does a fabulous job weaving a story filled with distinct characters with goals, fears and triumphs we can all can relate to. Despite differences of era, culture, setting, and religious traditions, the characters in this series depict universal joys and pains that resonate with everyone.
You don’t have to be a fan of Amish or “bonnet fiction” to be captivated by Cramer’s Amish works. My husband saw me reading The Captive Heart and teased, “So is there any action in that book?” To which I replied, “Yes, tons!” I’ve decided this series creates a new fiction genre: Amish Action.
The loves, joys, fears, and sufferings of the characters in The Captive Heart are deeply emotive. The romantic threads of Miriam and Rachel as well as the ominous threats and dangers kept me hooked and reading non-stop. This series so far is a well-rounded, rewarding blend of romance, mystery and gripping action. It’s a blend I could easily see played out on the big screen. I eagerly look forward to the third and final book in the series and am already sad this beautiful saga will come to an end.
Note: I was provided a copy of this book by the publisher for an honest review.
Posted by Camille Eide at 10:44 AM

What a great review! Dale Cramer's writing is so good - hope to read this series soon.

Hi Camille- I got a Kindle gift card for Christmas (best.gift.ever.ever.ever.) and I'm totally going to use it to get this book. I've read Dale Cramer before (I think) and I'm excited to get this one. Thanks for the review!

Erin - if you haven't read Paradise Valley, the #1st book in the series, the eBook for your Kindle is free through Jan 4 at Amazon. Click the Paradise Valley link at the beginning of this blog post and grab it up! And All of Dale's other books are great, but if you aren't sure you've read him, I recommend Summer of Light first. A must read. :-)

Hmmm, I might have to check that out. As a whole, I'm not a fan of Amish fiction but this book sounds good. :-)

I'd already read his book Levi's Will, not your typical Amish story at all, and I knew it was based on family history, so when I heard he was coming out with this series, I knew it would be unlike anything else. I may read some Amish fiction someday, but I do highly recommend this well-written series. :-)