Wait Until They Actually Call Your Name: Lessons in Surviving Award Ceremonies

For one moment, I couldn't breathe.

At the Oregon Christian Writer's Conference last week, after dinner Wednesday night, the Cascade Awards were given for published and unpublished works. What a tremendous boost to writers, to be acknowledged for the time, effort, and heart that goes into our work.

My latest novel, The Memoir of Johnny Devine, was a finalist in the Historical Fiction Category, rubbing shoulders with Peter Leavell's West for the Black Hills and Sins of the Mother by Caryl McAdoo. The winner is announced with the first line of the book (or piece) followed by the title and the author.

When the "Historical Fiction" category came up, I held my breath. For the life of me, I couldn't remember the first line of Johnny's story.

Then I heard this...

"After all the women I've known and all the illusions of romance I've helped create on stage and film, you'd think I was Hollywood's leading expert on love. In fact, many people not only believed this, but banked on it."

I think I stumbled to the stage before my name was actually read---awkward. (I never really know what to do in most important situations, so I'm really lucky if I actually do what I'm supposed to.) 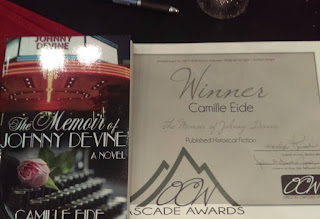 What an honor for Johnny to win this award, and what an honor to be included with such fine authors!

Back at my table, my husband and my publishing team (Ashberry Lane's Christina Tarabochia and Sherrie Ashcraft) were beaming and quietly congratulating me as the award program continued. I confess I was in a fog and didn't catch the winners in other categories I'd hoped to hear.

Then the ceremony turned to the two special awards OCW gives each year. Prolific author and generous mentor Melanie Dobson was awarded the Trailblazer award and everyone cheered. 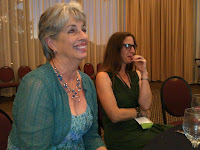 As the next award was presented, a hush settled across the room. Marilyn Rhoads began to describe the author receiving the 2016 Writer of Promise award. The bio sounded strangely familiar. As Marilyn went on, I heard muffled sobs beside me. Christina and Sherrie were crying--Sherrie audibly. Traci, my super cool conference roommate at the next table, was grinning at me with tears in her eyes. As more of Marilyn's description of this author and her work became clear, my lungs stopped working. (The best thing to do in a situation like that is to actually breathe in AND out so you don't pass out in front of 300 people, and to think of something to say--asap.) 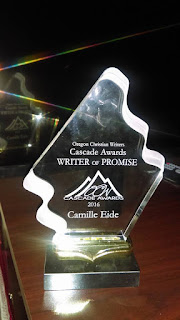 When Marilyn said, "and her book, The Memoir of Johnny Devine is this year's Historical Fiction Cascade Award winner--" the room exploded in cheers and applause.

Marilyn was looking my way, so I of course rose and climbed onto the stage, quaking from the thundering energy in the room.

It wasn't until I reached Marilyn that we all realized she hadn't actually SAID MY NAME yet. Awkward, again, but funny this time--I hope.

As best as I can remember, I thanked the organization, the mentors, and the writing community that I've been blessed to know as a result of being part of OCW. I realized later that I neglected to thank the One whose promise is steadfast and true, and whose gifts and abilities are treasures to be used with confidence and for His glory. 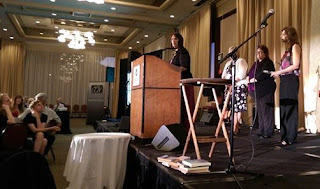 So to Christ, I give my deepest thanks and my renewed commitment to write as he leads and to surrender the work of my hands to his purposes. May he be glorified in each word I write.

And may I remember to breathe. 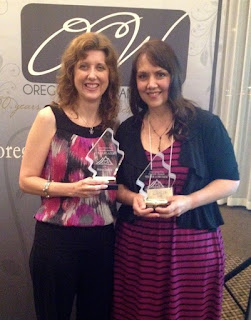 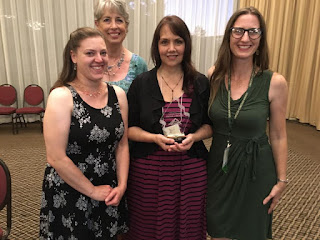 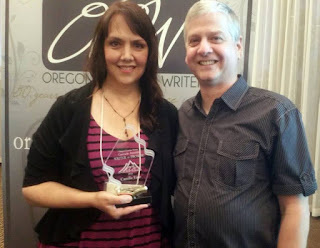 That was such a special night! So glad we were there to share it with you, Camille!

Oh, Camille! This was just about the exact reaction I had... And I raced to my blog to make sure everyone knew that The Author of all was the one needing to be glorified. He knows your heart! Never fear! Congratulations sweet friend!

Positively deserved & hard-earned...I'm so delighted for you...social faux pas & all!

So happy for you Camille, and proud to be associated with you and the other fabulous authors at Ashberry Lane!

This awards ceremony was such a delight to be a part of! So many amazingly talented authors entered and were both winners and runners up--but obviously the highlight was to see a friend win for a book I got to sit on the sidelines and watch her write. Congrats, Camille--it was so very much fun for all of us to be with you as you earned a few awards. :D

Well deserved, Camille. You've worked so hard and I'm delighted to see success rolling your way. Thank you, also, for your words giving glory to His name. You are an encouragement to me.
Dawn Shipman