We've looked at dozens of bikes, spent time and gas driving miles from home, tested, kicked tires, choked, throttled, straddled, kicked some more and found bikes that were either not in great shape, or were too high priced. I was about to give up, but yesterday a long-time-no-see friend callled and said he was selling his 1987 Kawasaki 454 LTD. I tested one of those already and it wasn't in great shape, definitely not worth $1800 asking price. So I didn't have much hope I'd like this 22 year old bike. But my friend's asking price was too good to pass up, so we figured we had to at least look.

Well, this bike may be 'mature', but it's the best running, most well kept bike of all the ones we looked at, and FAR cheaper. It had been garaged since last fall and needed a new battery, which he installed the day we came to look. He rode it once. When we fired it up, that baby idled with the smoothest purr you've ever heard. It is a real sweet bike. And a perfect fit for me in height, weight, straddle width, the works. We said we'd take it. AND our friend said he would deliver it, saving us the headache of strapping it down in the truck (we are not endorsed and are good, law-abiding citizens).

At least he SAID he was going to deliver it . . . He said he and his wife want to take one last ride on it, so he will bring it sometime this weekend. Then, after a little more catching up chit chat, he said, yeah, I'll bring it by first part of next week. Hmm. I'm really hoping he doesn't change his mind. I was bummed that I can't get out there on it this weekend and start practicing for my endorsement test (June 20), but oh well. I'll squeeze in some riding every chance I can.

And I found a great deal on a brand new helmet on craigslist from a guy in my own neighborhood. I'm just about set! 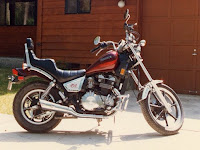 Ah, the memories.
And the ankle burn scars.

Actually, I had a lot of fun on a Big Wheel! But you're right, the open highway is no place for a Rebel. I hope the new old bike comes through for you and is a joy.