BOOM News for WCTH Fans and a GIVEAWAY! 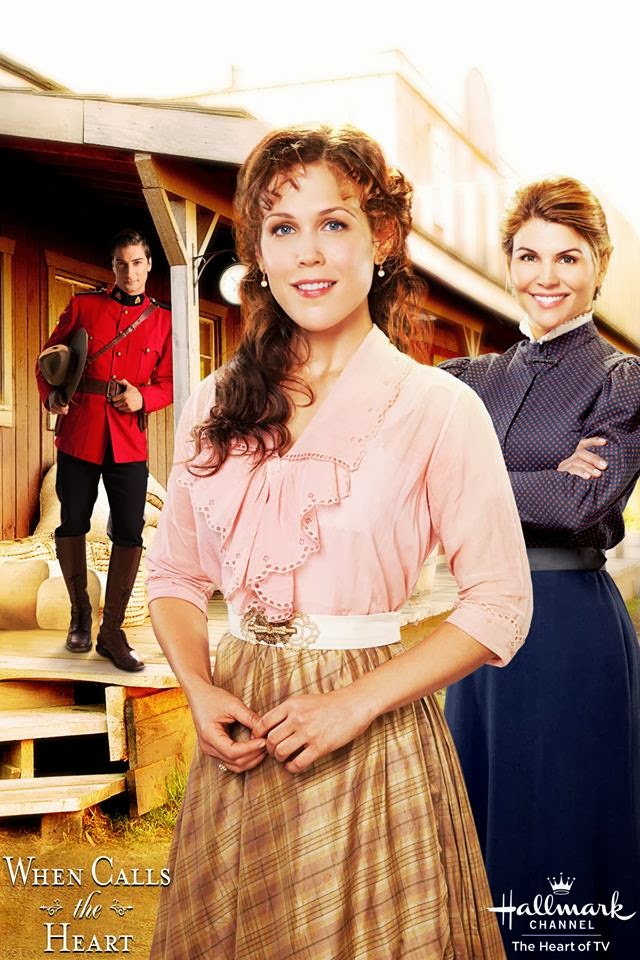 Are you a fan of faith-friendly, family-safe TV and film? It has been rare to non-existent in today's viewing fare. If you've known me for even a short time, you know I'm a MAJOR fan of the Hallmark (or CBC.ca) TV Series "When Calls The Heart" based on the Canadian West series by Janette Oke. Produced by Michael Landon Jr and Brian Bird, and starring Lori Loughlin (Full House, Garage Sale Mysteries), Daniel Lissing, Erin Krakow, and a full cast of talent, this clean, romantic family drama has launched a grassroots swell of fans known as "Hearties."

The good news? The Hearties' hard work in spreading the love about this wonderful show has paid off. Hallmark has renewed the series for third season! Season 3 will kick off with a Christmas special, followed by new episodes beginning Feb 2016.

To celebrate, I'm holding a drawing for a chance to win a super cool "Hearties" t-shirt, compliments of Fish Flix Christian Film Distributors.

Winner will be selected by Random Result.

TO ENTER: Leave a comment quoting either your favorite line from When Calls The Heart (any season), or if you have not yet seen it, a line from your favorite family-safe TV series or film (name the show). Also, please leave your email (spell out "at" and "dot" to avoid spambots finding you) with your entry so winner can be contacted.

Entries received until midnight (pacific) July 31. So quote away!

"I love you Elizabeth Thatcher" ��

"To make it in a man's world, you've got to be twice as good." ~ Abigail Stanton

"The light of love restores every lost voice."
Smathews1814 at yahoo dot Com

"When I'm with him, it's like everything else in the world just fades away." - Elizabeth
donnyandshelly at Yahoo DOT com

"If…Let’s say a bear saved a deer from a skunk–a skunk who had every intention of hurting her, why…why then would the deer be angry at the bear?" I still giggle at the question =]

I love you Elizabeth Thatcher

Elizabeth please do consider this an act of courtship.

"And, Elizabeth, please do consider this an act of courtship." Jack Thornton

"Elizabeth, please do consider this an act of courtship".-Jack
The Change Of Heart season 1 episode 9
sarahrichmond(dot)12(at)gmail(dot)com

"All I know is what I feel for you. The question is, what do you feel for me."
jodimayd@gmail(dot)com

The best part of arguing is the making up :)

The best part of arguing is making up.
irishrose157(dot)@Hotmail(dot)com

The best part of arguing is making up

"I hope you'll see over time, my heart is true"! Jack
Sierrabeautycollege(at)yahoo(dot)com

Jack; And Elizabeth, please do consider this an act of courtship

"Rosie, you could side track an army"

Lee to Mounty JacK....that boy is a goner is head over heels in love with a woman just like you Mounty Jack replies ...where would you get and idea like that ...lee then says from everyone in town that this is why you are spending your reward money and now your time...

You may be selling young man but I aint buying.......LOL

"I think a whipstitch will do here nicely".
Trdivincenzo at gmail dot com

“Me, meddle?! I don’t meddle, I invest emotionally into your well-being.” -Julie

Elizabeth says "you think I'm in search of Flattery" Jack responds with " No, I'm just saying, threw down the hay where the goats could get at it". Elizabeth responds, "you're calling me a goat"? shadylady1880(at)att(dot)net

You're the one, the only one.


Jack: "If…let’s say a bear saved a deer from a skunk–a skunk who had every intention of hurting her, why…why then would the deer be angry at the bear?"

Your the one, You are the only one

"Jack do you stay up are night thinking if ways to drive me batty.nope dont have to just sorta comes out natural."
Maggie Warren
holdermaggie(at)ymail(dot)com

Love Elizabeth and Jack but I also love Abigail (Lori Loughlin)and her Strength!
She was one of the first to convince the other wives to give Elizabeth a chance when she first came to Coal Valley. She lead the other wives to work in the Coal Mine when they were going to be forced out of the homes..."You need workers, we need roofs over our children's heads!" And, I cannot remember exactly the way she said it but loved when she jumped up on the chair and told the fussing workers that at her café they will act like gentlemen! Gotta love a woman who takes charge! That's a true pioneer woman! Laura G. Spence

"I have a dog!" anitarogers23atgmaildotcom

"I don't meddle, I invest emotionally in your well-being!" stitchnquilt23atyahoodotcom

"Sometimes we have to be the heros for the ones we love!" stitchnquilt23atyahoodotcom

"Sometimes love comes just in time to save you," stitchnquilt23atyahoo.com

Therefore, you may call me Elizabeth.

"I have a dog."- Jack
autumngirl8(at)hotmail(dot)com

Jack to Elizabeth while sitting in the cave, "… Now that I have seen your knee".

Patricia Macek. " We changed our cow, Gertrude, name, to Lizzy" We figured she was the first cow that you ever milked. Mounty Jack Thornton, said "Lizzy, I like it".He gave her a gift, a cowbell, since she did a great job at the homestead.
Season 2

Jack Thornton: "Was there another option?" cheryl dot pimental at brooks dot com

Its the other knee ��❤ jennwright5 at yahoo dot com

"Love follows you wherever you go."
Johnbeckie at q dot com

“I can face any obstacle with courage, grace and dignity." --Elizabeth
Ctrani at optonline dot net

"Was there another option?" Nkelchlin at Gmail dot com

"I have a dog" S1E11 jack to Rosie bobbidotschutteathotmaildotcom

And we have a WINNER!! #14 (number drawn by RandomResult.com)

Michael, Amy & Emma said...
The best part of arguing is the making up :)