RT Book Reviews recently gave The Memoir of Johnny Devine (Ashberry Lane, Dec 2015) a glowing review! I’m amazed at how much insight the reviewer was able to squeeze into the 175 word limit. She also rated it 4½ “yellow” stars and Top Pick.

I didn’t realize the different color (usually the stars are blue) meant anything until a senior RT reviewer pointed out to my publisher that those are GOLD stars. She also said the gold rating is a rare, only given once or twice a year. In fact, 4½ gold stars is equivalent to 5 stars, which they did away with years ago (for some mysterious reason).

But then, a few days ago, I heard that RT is planning to bring the 5 star back. The next day, I discovered that the rating on Memoir had been changed to FIVE GOLD STARS. As far as I know, no book has received 5 stars from RT Book Reviews in years.

So this is huge!!

And to top that off, I also learned that The Memoir of Johnny Devine is an RT 2015 Reviewers’ Choice Award Nominee! This nomination is for books that reviewers consider the best of the best. I’m thrilled that Memoir is listed alongside such fine, talented inspirational romance authors such as Laura Frantz, Sarah Ladd, Robin Lee Hatcher, and Jen Turano. 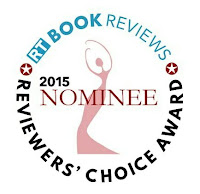 I’m thrilled, honored, and grateful, but I’m not sharing this to get pats on the back. I’m hoping that this special nomination and rare five-star rating will help give Johnny Devine a better chance to reach readers who will love and be touched by this God-inspired story. And I hope those who love it will share it with every reader they know. In the literary world, the best advertising is still word of mouth.

Find out more about this story and where to get your copy at www.camilleeide.com.
Posted by Camille Eide at 8:41 PM