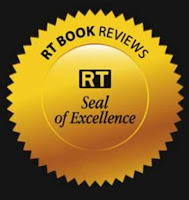 In addition to being a 2015 Reviewers’ Choice Award Nominee, The Memoir of Johnny Devine (Ashberry Lane, 2015) has been awarded the RT December Seal of Excellence — the RT Editors' Book Pick of the Month.

“The RT Seal of Excellence is awarded to the one title each month that stands out from all the rest. The RT staff nominates contenders which the editors then read and discuss at length. Sometimes a book is propelled to the top of the list by an innovative twist on a familiar story, or a villain that leaves readers chilled to the bone. In other instances the setting or the author’s writing style has set the story apart. But every title that wins the RT Seal of Excellence is our pick for the best read of the month.” —RT Book Reviews


What RT Editors are saying about The Memoir of Johnny Devine:
“I am having a difficult time finding the words to describe exactly how much I loved The Memoir of Johnny Devine. Religion, particularly as a person’s saving grace, is a deeply personal and highly subjective topic. However, Camille Eide introduces the plot point with such sensitivity and respect that it’s easy to identify with the characters. I cannot tell you how much I loved reading about an educated, unmarried woman making her own way in the 1950s. In a time where women were expected to stay home, marry and take care of the household, our heroine Eliza is committed to her career and correcting social injustice. Her intelligence, sensitivity and grace immediately endear her to her new boss, the famous Hollywood heartthrob Johnny Devine (whom I pictured as George Clooney...you’ll see what I mean when you read). The most intriguing (and also disturbing) thing about this story is that despite the 1950s setting, the need for gender and racial equality as well as the ongoing witch hunt that is the Red Scare are very relevant today, in 2015, and I applaud Eide for being part of the conversation. She has managed to intertwine a beautiful love story, the desire to build a personal relationship with God and the necessity for social change into one truly fantastic read.” —Kristin Wise

Read the rest of the RT editors' reviews HERE.

The 12 books awarded the Seal of Excellence in 2015 are the nominees for RT BOOK OF THE YEAR. Only these twelve are nominated out of thousands of books RT reviews each year. It is a tremendous privilege and honor to be included in this list. But even more, it is especially meaningful to see God and the story he inspired set apart and honored in such a way. I'm extremely pleased and grateful for this.
Posted by Camille Eide at 11:14 PM