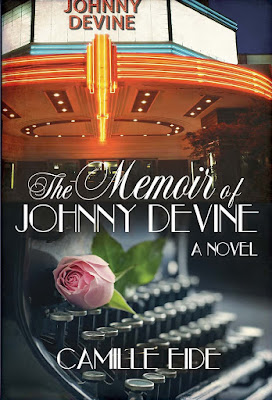 I LOVE THIS COVER!!

KUDOS to Nicole at Miller Media Solutions and Ashberry Lane Publishing for this stunning book cover for my upcoming novel! I think it is the perfect blend of of Hollywood glamour, nostalgic mood, intrigue, and romance, don't you?

The Memoir of Johnny Devine is a “classic” love story set in 1953 at a time when post-war America seeks security in prosperity and conformity. Hollywood’s Golden Age is coming to an end, McCarthy's “Red Scare” reaches new heights of paranoia, and unrest over civil rights continues to grow. It’s a story for those who enjoy a character-driven, inspirational drama, a strong but chaste romance, and a touch of intrigue.

This novel was a blast to write and research. In fact, the idea for it came to me in a dream one night at a time when I was in the middle of writing another book. I was so moved by the dream that I set the other book aside and began plotting. Soon, Johnny "Devilishly" Devine was born. (He may possess a few attributes similar to Cary Grant, Clark Gable, and Gregory Peck. Their best ones, of course. :) )

Love can’t rewrite the pages of one’s past,
but it can cover a multitude of sins
---one page at a time.

Rumor had it that Johnny could seduce anything in a skirt quicker than he could hail a cab. But now, the notorious womanizer claims he's born again. Trouble is, everyone knows who he is and what he's done, and they'll never forget---the tabloids have made sure of that.

1953: Eliza Saunderson is a young war widow appalled by societal injustice and inequality. She also resents the notion that modern women are expected to look fashionable, keep house, and play bridge. What if a woman has other aspirations, other skills, other dreams? And then there was the expectation of marriage. Her's hadn't turned out to be the fairy tale her sister promised. Instead, marriage had taught her a painful lesson: Love wasn't worth the constant work of earning and fear of losing it. If what she had could be called love.

Desperation forces Eliza to take a job writing the memoir of the ex-Hollywood heartthrob, Johnny Devine. But to her surprise, she finds herself falling for the humble, grace-filled man John has become. Meanwhile, her passionate articles on racial injustice land her on McCarthy’s hit list and she must clear her name while trying not to fall in love with a man whose scandalous past keeps him too busy to notice her.

The Memoir of Johnny Devine is the dramatic story within a story of a bad boy reformed and a good girl in need of reform. It’s a powerful tale of love, redemption, intrigue, and the miracle of God’s deliberate grace.

Johnny releases in print and eBook in December, but the eBook is now available for pre-order at a Special Price of 3.99 ($1 off) thru release day.
Posted by Camille Eide at 5:05 PM

Looks like another good one, Camille! Nice cover and intriguing story line.

Thank you, Miralee. I think you'd really like this one. ;)